How to report on koha

This page provides guidance on how to report koha in charities' performance reports. Published 25 January 2022.

Reporting on your koha for accounting purposes may be different to reporting on a tax basis. Please refer to the Inland Revenue website(external link) for more information.

While koha can be described as an “unconditional gift”, the way koha is given and what is given as koha can vary widely, and this changes how it will be reported. The purpose of this guide is to help you think about how to report koha in your performance report. We have also included some examples of how you could account for different types of koha.

On this page we separate between koha and payments for a good or service. Koha is often given by manuhiri (visitors) to tangata whenua (hosts) in the pōwhiri process. While koha may help with the costs incurred by tangata whenua, the manuhiri are giving koha because it is customary to do so, not as a result of a financial transaction.

Some examples of koha are:

Some people refer to koha as the cost of a good or service, such as the payment for renting out or staying at a marae. We also explain how this should be dealt with in this guide.

Where do I report on koha?

For Tier 4 charities, koha should be included in the Donations, fundraising and other similar receipts, in the “Statement of Receipts and Payments”.

For Tier 3 charities, koha should be included in the Donations, fundraising and other similar revenue, in the “Statement of Financial Performance”.

If you want to give more information about koha for people reading your performance report, you can include more detail in three places.

1. In the Notes section of the Performance Report

3. Change the name of the “minimum category” to include the word koha

When and how do I record koha?

When recording koha you first need to know if the koha given was cash, or non-cash. Then look at whether anything was provided in exchange, which would be considered a Receipt from providing goods and services. If it was not cash, consideration needs to be made if it was significant to the charity.

The word “significant” on this page is an accounting term. It’s used to refer to something you expect to use for more than 12 months, or an asset large enough in value that not recording it could change the reader’s understanding of your charity/performance report.

We are not talking about things that are culturally significant, such as taonga. We are also not talking about things that may have cultural significance, but no monetary value or no way of being priced. If you think it’s important for readers of your performance report, then providing a Note with a descriptive list of significant taonga may be an appropriate way of acknowledging the mana of those that have donated taonga to your group. If your charity is gifted taonga that is also significant from an accounting perspective (e.g. a high value piece of art), you would still need to record this as income and an asset. 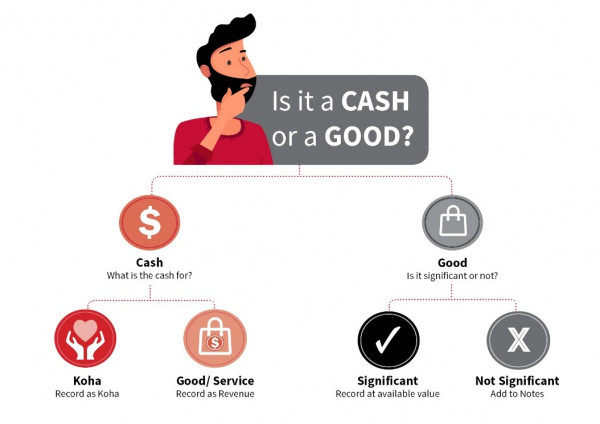 For Tier 4 charities, the only requirement is to record koha received as cash.

Question: Was the koha given as cash?

For Tier 3 charities you need to also record non-cash koha if the transaction is considered significant to your charity.

Question: Was the koha given as cash?

The following fictional examples have been created to help you understand how to report koha transactions.

Example 1: Cash was received during a pōwhiri from a community member

A small town marae held a pōwhiri. During the ceremony the manuhiri (visitors) gave koha of $200 cash as a sign of appreciation for the marae hosting them. The pōwhiri was for a couple of hours, before the manuhiri left

Example 2: Cash received for use of a marae (i.e. payment to use the facilities for a function or event)

An urban marae hosted a noho. Before the event, the marae asked for $500 to pay for the food and accommodation, and provided an invoice for this amount. This was paid in cash at the noho with the intent of paying for the invoice. During the pōwhiri ceremony the manuhiri (visitors) felt it was also culturally appropriate under tikanga to give $150 koha.

Example 3: Oven gifted to marae from a community member

A marae in the city which is also a Tier 3 charity, was gifted a new oven by a community member. The oven was given as a sign of appreciation for the marae. The marae did not provide any goods or services to the community member in direct exchange. The oven is expected to be used for the next 5 years so it is significant based on the accounting definition. The purchase price was provided through a receipt and was for $700.

The value is $700 and this is recorded as revenue in the Statement of Financial Performance with more information provided in the Notes.

IMPORTANT: Tier 3 charities must record the asset in the Statement of Financial Position and provide further details in the Property, Plant and Equipment Note of the performance report. Tier 4 charities can choose whether to record the resource. If the receipt was not provided, the marae could still obtain a value for the oven from another source (online, in store, etc) and record the oven at that price. If the value was not obtainable, the charity should shall disclose in the notes to the Performance Report a description of the asset, categorised by class where appropriate.

Example 4: A second hand dining table was donated by a community member

A rural marae was gifted a second-hand dining table from a community member as a sign of appreciation to the marae. The marae noted the monetary value of the table would not be significant when reporting and it would only be used for 6 months until a new one was purchased. There was no easily available value as the table was second hand and no similar table could be found in the local market.